What is the RUS or the Rural Utilities Service?

The United States Rural Utilities Service (RUS) is in charge of administering programs that provide rural communities with infrastructure or infrastructure improvements. The programs administered by the RUS include water and waste treatment, electric power, and telecommunications services. The RUS is a part of the USDA Rural Development Agency of the United States Department of Agriculture. The RUS provides assistance... Read more

Can coupling nuts be made in custom lengths?

Hex and heavy hex coupling nuts can be made in custom lengths. Depending on the size and grade, however, there may be an extended lead time associated with doing that. Off-the-shelf coupling nut lengths have fairly few options for a given diameter. As long as the coupling nut is long enough to achieve the desired thread... Read more

A325 structural bolts start at ½” diameter with the shortest length available being 1-1/4”. As far as the ASTM specification is concerned, there is not an official documented reason as to why they are not readily available; however when asked to provide 1” length, we have found that they are not easily obtained in the marketplace.... Read more

Are Split Rings Graded the Same as Shear Plates?

Can Portland Bolt mail me a catalog and a price list?

Portland Bolt does not have a traditional catalog or price list. The reason for this is because the majority of fasteners supplied by Portland Bolt are custom made on a per order basis. Once manufactured, the parts are shipped out immediately to the end user, so a price list would not be easy to compile. Portland... Read more

Portland Bolt manufactures eye bolts to pretty much any size imaginable. The type of eye bolt that Portland Bolt makes is not forged, but is turned and can be welded shut if needed. When load ratings are provided for eye bolts, they are normally for forged eye bolts, where the eye is formed as one solid... Read more

As the ASTM F3125 specification becomes more prevalent, the issue of configuration may be a source of confusion. The main reason is that in the past, ASTM A325 has been limited a heavy hex head structural bolt only, which implies a structural bolt thread length with Unified National Coarse thread. With the implementation of ASTM F3125, A325... Read more 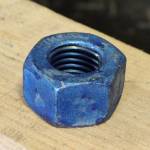 Why are some hex nuts blue in color?

It is often asked why some high strength hex nuts that are supplied with high strength bolts appear to be blue or some other color. This is normally the case with galvanized, high strength, heavy hex nuts and the reason for this is because of the wax lubricant applied to the nuts. According to the... Read more

What is the life span of the hot-dip galvanized coating of a bolt?

A common question when deciding whether hot-dip galvanizing is an adequate corrosion resistant coating for a fastener is, “How long will the galvanizing last before the steel begins to corrode?” The last thing you want to do is install a bolt in a corrosive environment, only to have it begin to rust a year later. Unfortunately... Read more

DTI Washers with A490 Bolts

Can A325 Load Indicating Washers be used with A490 structural bolts?