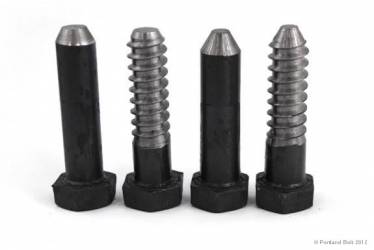 Hex lag screws are large wood screws. Although the term “lag bolt” is often used to describe this product, technically they are a screw since lags are installed in wood by rotating the six-sided head. The lag thread is deeper and sharper than national coarse thread since it is designed to drive into wood and not to be used with a nut. Imported hex lag screws normally originate from Asia, possess a gimlet point, and meet the requirements of ASTM A307 Grade A. Portland Bolt can manufacture lag screws to meet other ASTM specifications or when the project requires domestically manufactured lag screws.

Portland Bolt manufactures lag screws from 1/2″ diameter through 1-1/2″ diameter in most ASTM, AASHTO, and SAE specifications. Special tooling can be created to produce nonstandard head dimensions or bolt heads with your company’s name and/or logo.

Unless otherwise specified, nonstandard lag screws manufactured by Portland Bolt will possess a semi-cone point rather than a gimlet or cone point. A full point is unnecessary since a pilot hole nearly as large as the root diameter of the lag screw will need to be drilled prior to installation. Additionally, a gimlet point is designed for small diameter screws so they can be installed without a pilot hole. Lag screws in diameters listed in the above table do not require a gimlet point since too much torque would be required to install the large screws without drilling a pilot hole first. Without a pilot hole, the heads of the screws will often break before the lag is properly installed.

A common, nonstandard lag screw manufactured by Portland Bolt is designed for radial reinforcement of glulam beams. These fully threaded lag screws, sometimes referred to as “stitch bolts”, are often several feet in length and prevent the laminations of a glued laminated beam from separating over time.

The minimum thread length shall be equal to one-half the nominal screw length plus 1/2″ or 6”, whichever is less. One should consider longer than standard thread lengths for lag screws which are extremely long.

Note: Hex lag screws larger than 3/4″ in diameter and all square lag screws are rarely available in the marketplace as a stock item. 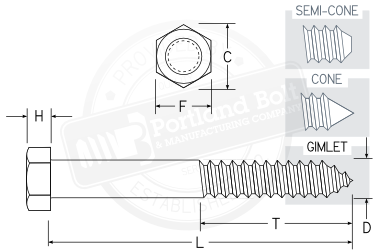