What is the difference between cast-in-place anchors and post-installed anchors?

Anchor bolts come in several different configurations, such as 90-degree bent, headed, rods with threads on each end, or fully threaded rods to name a few. Anchor bolts can be made in many grades. shapes and sizes, however, there are two distinct categories of anchor bolts: post-installed anchors and cast-in-place anchors. Although both types essentially perform the same function, the configuration will differ depending on the application. The following information will lay out the differences between the two. 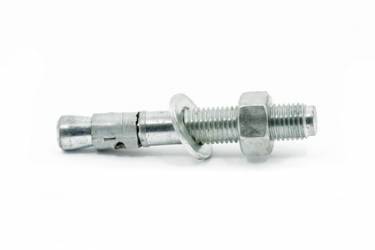 Mechanical expansion anchors are first placed into the pre-drilled hole. They then expand, bearing against the concrete surface. Wedge anchors are a common type of MEA. MEAs are easy to install, however they have a relatively low tensile strength and are not recommended for use in tension zones where concrete is likely to crack.

Adhesive anchors are anchor bolts that are placed in a pre-drilled hole, which contains an adhesive that dries and bonds to the anchor rod thread as well as the concrete. Adhesive anchors, also known as epoxy anchors, are capable of reaching high bond-stress values in relatively fast cure times. Adhesive anchors are fully threaded rods that can be supplied in many different grades and finishes and can be cut to any length required for a given application.