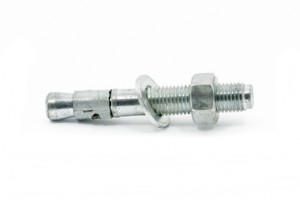 No. The ASTM F1554 specification clearly addresses the type of bolts that are covered under this specification, and which types of fasteners are not.

ASTM F1554 Section 1.1 states that F1554 covers “…straight and bent, headed and headless, carbon boron, alloy or high strength low-alloy steel anchor bolt (also known as anchor rods).” Additionally, in Section 1.2, “The anchor bolts are intended for anchoring structural supports to concrete foundations.” Finally, in Section 1.6, the specification reads, “This specification does not cover the requirements for mechanical expansion anchors, powder-activated nails or studs, or anchor bolts fabricated from deformed bar.” Wedge anchors, which are also known as expansion anchors or expansion bolts, are considered to be mechanical expansion anchors and therefore, are not covered by ASTM F1554.

In summary, F1554 allows for a variety of anchor bolt configurations, but does not cover hardware, such as expansion anchors, that are used for functions other than anchoring structural supports to concrete.

What are the tolerances for F1554 anchor bolts?

Can one of these wedged anchor bolts be as strong as a bent anchor or threaded anchor old?

@Louis- There are many variables, so the answer is not black and white. Different wedge anchor styles and brands have different pullout strengths, and the type (strength) of the concrete can vary as well. All things equal, the cast in place should be stronger, but we can’t say that every cast in place is stronger than every wedge anchor.

– do you have any 3/4″ or 1″ bolts which I can install through a 7″ floor slab and into the flange of a W18x50 without going to the underside of the slab (it is a water reservoir below the slab). thanks.

@M. Hrabok- We do stock bolts that are long enough for your application, but I am unsure of exactly what you need. If you could get us a bit more information, perhaps we can assist.