Unless instructed otherwise, Portland Bolt will ship nuts and washers unassembled from bolts, with a few exceptions:

Tie rod assemblies are commonly used in heavy timber construction and in erecting architectural and structural steel. The assemblies typically consist of a threaded rod with right hand thread on one end and left hand thread on the opposite end with a clevis threaded on both ends. An alternative configuration will also include either a turnbuckle or sleeve nut which is used to connects two rods and provide a mechanism to tighten or loosen the assemblies. Portland Bolt typically assembles clevises, turnbuckles, and sleeve nuts to tie rods so there are no fit issues during installation.

Pole line hardware is used to fasten wooden crossarm members to utility poles and in other line specialty products. Portland Bolt will fabricate an added semi-cone point to the threaded end of pole line fasteners and then assemble a nut, usually a square nut, to the threaded end as well. The added semi-cone point and the square nut are required to facilitate an easier installation since the fasteners are installed by a line worker high above the ground. For this reason as well, a nut will come assembled to pole line hardware. 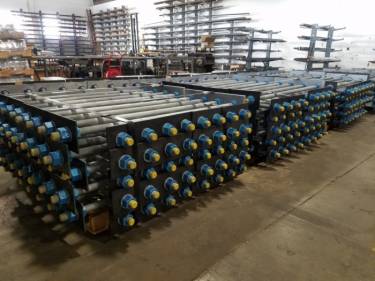 Anchor bolts are installed in a specific pattern to match the baseplate they fasten to the concrete foundation. Often times an embedded plate is added to anchor bolt assemblies which will combine a number of anchor bolts into one set. In these situations Portland Bolt will add a top template with the same pattern as the embedded plate in order to hold the anchor bolts in position during shipping and installation. Two nuts will be assembled at each end of the anchor bolts to “sandwich” the steel plates and hold the kits securely in place. 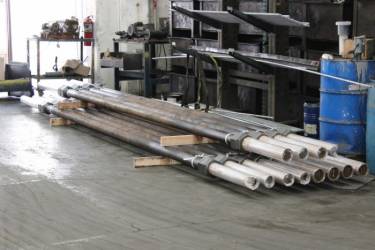 Portland Bolt is equipped to assemble hardware to bolts outside of the above examples, but we would have to account for the required labor time involved to complete the work. Lead times and costs would vary depending on the complexity and volume of assembly work. Contact one of Portland Bolt’s estimators if you have a project that requires special assembly on anchor bolts or large custom construction fasteners.

Can threads be chased after hot-dip galvanizing for proper nut fit?

Can I use black (plain finish) or zinc plated nuts on galvanized bolts?

How do tie rods attach to a structure?