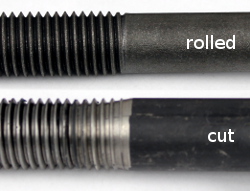 When threading bolts, the two most commonly used methods are cut threading and roll threading. We are often asked if bolts which have been roll threaded have a full body diameter or a reduced body diameter. Depending on the type of fastener, the answer is both. When Portland Bolt produces bolts with rolled threads, we begin by cutting pitch diameter round bar which has a reduced diameter (approximately the midpoint between the major diameter (peak) and the minor diameter (valley) of the threads. The steel round bar is displaced or extruded as it is forced between two dies to form the threaded portion of a fastener, instead of being removed as in cut threading. The end result is a fastener with a reduced body diameter. For example, a 1” diameter bolt will have a 1” threaded portion, but an unthreaded shank of approximately .912”. This is a perfectly allowable way to produce the vast majority of ASTM construction fasteners, with the exception of A325 and A490 structural bolts which require a full sized body diameter.

Roll threading fasteners with a reduced body is common for custom sized bolts on a job to job basis. However, there are circumstances where a bolt has been roll threaded but has a full body diameter. This is usually the case with mass produced A307 bolts and A325 and A490 heavy hex structural bolts, which are readily available and are usually smaller in size. In this case, full diameter steel wire rod is fed into an automated bolt maker which often times performs the cutting, heading, and threading operations in the same machine. After the bolt is cut to length and headed, the portion of the bolt that is to be threaded is extruded down to the pitch diameter prior to the thread being rolled onto the fastener. This results in a finished fastener that has been roll threaded, but would have a full size body diameter.

Can Portland Bolt add more thread to our existing bolts?

@Suzy- Apologies, but we are a custom manufacturer of construction fastener and don’t typically get involved with bolts of this nature. A hardware store or the mower manufacturer might be better options.

i want to calculate total bolt length for connecting thickness.

is there any mathematical calculation?

@Vikram – you would take the thickness of the materials you are joining, add length for a nut/washer, plus any additional stick out needed, keeping in mind the thread length of the fastener. I don’t have any specific published formula to point to.