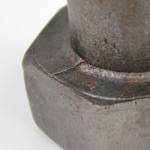 There are several differences between bolts intended for use in construction and more precision fasteners, such those used in an OEM application. One difference for headed bolts is the process in which the head is formed on the bolt and the resulting appearance of the bolts. Larger, construction headed bolts are typically made by hot-forging... Read more

Headed Bolts vs Rod with a Nut

Can a threaded rod with a welded nut be substituted for a bolt with a forged head?

When a threaded rod with a nut is substituted for a bolt with a forged head, two issues come into play. When in-house mechanical testing was performed by Portland Bolt on headed bolts versus rods with a nut, both from the identical lots of steel, the rod with a nut developed up to 12% less... Read more

How a Bolt Head is Formed

How is a bolt head formed?

What many people do not realize is that the head of a bolt is formed by heating the end of a piece of steel round bar and then forging (reshaping) the heated end into a head. The head is not welded on or otherwise “attached” to the end of the round bar. For example, the... Read more