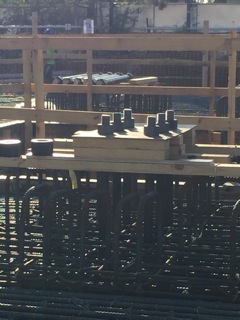 In the summer of 2015, Portland Bolt was called upon to provide large anchor bolts for a power plant conversion project in the Dominican Republic. The plant conversion included the addition of two heat-recovery steam generators along with a 114 MW steam turbine generator. These generators were added to the already existing two 105 MW simple-cycle natural gas-fired turbines which has increased the capacity of the plant from 210 MW to 324 MW without having to use additional natural gas. The project also included a modification of the existing two Siemens simple-cycle combustion turbine generators to a combined-cycle plant.

Another requirement for the project was to have an inspector from the Dominican Republic fly to Portland, OR, to inspect and sign off on all of the parts being manufactured for the project. Portland Bolt often has inspectors from different DOT’s and jobsites coming in to test and inspect products so this was no problem. The parts were all packaged in custom wooden pallets, stamped and cleared for international shipping. Each section of the project was manufactured and cleared for shipping in less than 3 weeks of lead time. With the help from Portland Bolt getting the entire list of required anchor bolts shipped out on time, the project was finished on schedule and was completed in early 2016.

Though Portland Bolt sits in the northwest corner of the United States, no distance is too great for us, so give one of our estimators a call the next time you have a project near or far. We’re ready to help you with your anchor bolt needs!