Does it matter if we install nuts on A325s and A490s with the manufacturer’s ID and grade mark showing, or can they be installed either way?

There is no published requirement for making sure the ID marks are on the outside and visible. The main concern would be being able to ascertain that the proper nuts were installed. If all the ID markings are on the inside, they would not be visible, and an inspector could not see them. That said, I would assume that the nuts wouldn’t have been installed “backwards” on purpose by the ironworker, it is much more likely that he simply wasn’t paying attention and putting them on however he grabbed them. One would then assume that, since you’d have a 50-50 chance of installing them with the markings out, that roughly half of them would have the markings visible. In that case, as long as all the visible markings are the correct ones, you could assume the nuts are all correct.

Structural nut manufacturers have the option during manufacture of making the nuts with either a double chamfer or with one washer face. See the diagram from ASME B18.2.2 below. The middle image has a double chamfer, is structurally interchangeable, and is the most common geometry available on ASTM A563 grade C and DH nuts. The image on the right has a washer face, and so therefore should be installed with the washer face against the structural steel (or washer). This configuration is more common on ASTM A194 grade 2H nuts. Another concern is raised grade/ID markings. Manufacturers have the option of raised or depressed markings. The issue with raised markings is that they could create issues during tensioning, since the raised marks up against the steel would create an uneven bearing surface. However if the markings are depressed, there wouldn’t be any structural reason why it would matter which direction the nuts went on. 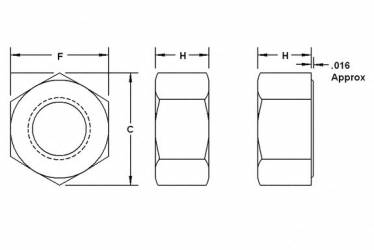 Some state DOTs and fabricators have a requirements in their own standards, and common sense would tell us that the grade markings should be visible after installation, but none of the publications that we are familiar with (ASTM/RCSC/AISC) make any mention of nut orientation.

@Xenia- The 0.016 dimension refers to the washer face. Washer facing is not required (but not prohibited) by the A563 standard. However, the other common nut standard, A194 requires that the nuts have a washer face to form a more even bearing surface.