University of Hawaii at Hilo 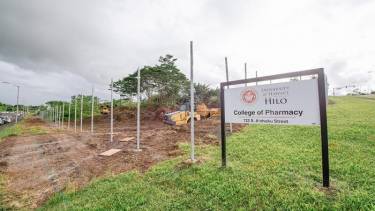 The Daniel K. Inouye College of Pharmacy (aka: UHH College of Pharmacy) is one of six colleges within the public University of Hawaii at Hilo. The College of Pharmacy was founded in 2007 and is the only pharmacy school in the state of Hawaii. In October of 2016, construction began on the long awaited permanent facility, which will house an instructional lab space. Until now, the college has operated out of five different sites as it was struggling to raise the necessary funding for a permanent facility. In 2014, $33 million was approved to fund the building, consisting of $28 million in general obligation bonds as well as $5 million generated by the University. The new building will be approximately 45,000 square feet, which was originally designed to include space for a research lab but was changed into an instructional lab space due to it being less expensive to build. The total construction time estimated is 18 months and the school should begin hosting classes by fall of 2018.

In March of 2017, Portland Bolt manufactured the anchor bolts required for this project. They were primarily made up of threaded each end rods, which included two nuts and a square anchor plate welded to the end that would be embedded. The diameters included 1”, 1-1/4” and 1-1/2” and ranged from 38” to 43” in overall length. The ASTM grade required for these anchor rods was F1554 Grade 55. There were also multiple sizes of ¾” and 1” diameter 90 degree bent anchor bolts certified to ASTM F1554 Grade 36. Portland Bolt is a custom manufacturer of non-standard size anchor bolts, which made us a great option for this type of fastener. In addition to the normal manufacturing processes included in making a bolt, we also perform the welding in house. Since all of the processes were performed at our facility, we were able to get the anchor bolt order to the barge in time to get on a boat and to the job site as needed.