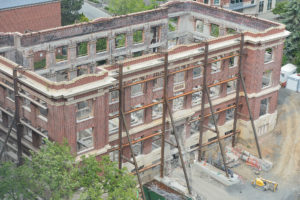 Troy Hall is a building located on the Washington State University campus in Pullman, Washington. The original construction of the building took place in 1924 and was completed in 1926. The building was named after David S. Troy who was a member of the WSU Board of Regents from 1910 to 1916 and later became a state representative and state senator. Since Troy Hall’s initial construction, it has yet to undergo any major renovations, which resulted in a need for a substantial remodel to the point where it was closed in 2010. For many years it was on WSU’s list of major construction projects needed. The budget for the renovation was approximately $32.3 million, which began in the spring of 2016 and was scheduled to be complete by February of 2017. The hopes were that the building could then be occupied by April of that year. Upon completion, Troy Hall would provide 50,202 square feet dedicated to academic instruction as well as research space to support chemical and environmental sciences.

In January of 2017, Portland Bolt manufactured the tie rod assemblies required for the final portion of the Troy Hall renovation. Lengths of 155” and 225” in 1” in diameter were needed, and both had a clevis on each end. Often times a turnbuckle would be used in the middle for adjustment purposes. However, for aesthetic reasons, the contractor preferred them to be a rod with threads on each end for the clevises to thread onto. Portland bolt manufactures custom tie rod assemblies on a regular basis, making our company a great source for these items. We were able to fabricate them in a timely manner per the customer’s specifications and ship them directly to the job site