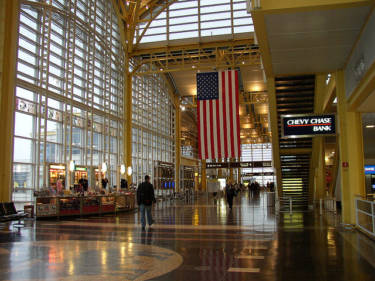 The Ronald Reagan Washington National Airport is an international airport located approximately 3 miles south of Washington, D.C. in Arlington County, VA. Originally the airport was called the Washington National Airport before being renamed after our 40th President. The Reagan National’s only scheduled international flights allowed to land are from airports that have U.S. Customs and Border Protection preclearance facilities. Because of this, Reagan National has U.S. Immigration and Customs facilities for business jet traffic only. Another interesting regulation is that flights into and out of the airport are not allowed to exceed 1,250 statute miles in any direction non-stop. Flights exceeding this distance need to use the larger Washington Dulles International Airport.

In early 2016, construction had begun to replace Gate 35X, which many considered extremely unpleasant. To get to this gate, passengers were forced down escalators and onto shuttle busses, which would take them to small commuter planes several hundred yards away. This became a well-known inconvenience considering over 5,000 passengers use this gate each day.  A joint venture had been awarded a contract worth approximately $75 million for the construction of a new pier replacing the existing gate, with indoor gate access. The construction project also included a new parking garage.

In February of 2016, Portland Bolt was contacted about the anchor bolt requirement for this project. The anchor bolts required were threaded on each end and were made up of 2” and 2-1/4” diameter steel meeting the ASTM F1554 Grade 36 specification. The lengths required ranged from 35-1/2” to 42” and the bolts were hot dip galvanized. In addition to the anchor bolts, Portland Bolt was also asked to supply the anchor plates needed when the bolts themselves were set. Since the bolts needed to be 100% domestically manufactured in the U.S.A. and the fact that Portland Bolt manufactures and galvanizes in house, we were able to get the parts to the jobsite in time to keep the project on schedule.