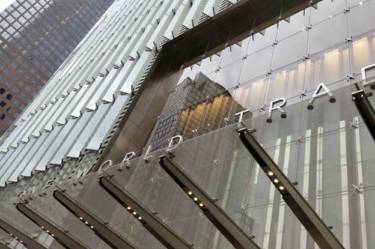 Plans for a new World Trade Center began in 2002. However, construction was delayed until 2006. The building would feature 104 floors and stand as tall as 1,792 feet. It is the tallest building in the United States.

In April and August of 2013, Portland Bolt shipped a total of 48 pieces of 2” diameter F1554 Grade 105 anchor rods to the One World Trade Center in New York City. These rods were being used to support the podium that features over 4,000 unitized panels with adjustable glass fins, perforated aluminum back panels, horizontal stainless steel slats, and an integrated LED lighting system . The rods were 100% domestic and hot-dip galvanized. Portland Bolt was able to deliver the rods in a timely manner and provide full certification documents.

Additional anchor bolts for the West Portal were shipped twice in 2014. In January of 2016, Portland Bolt manufactured 2″ diameter high strength anchor rods for the transparent glass cable-net wall systems as part of the East Wall Design. In March of 2017, Portland Bolt shipped via next day air 22 high strength rods to 1 WTC to secure a hanging bracket for an upcoming event.

If your project requires custom fasteners, Portland Bolt is a great source and can accommodate special shipping