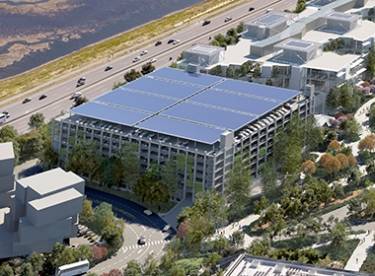 In early spring of 2019, Facebook began an expansion of its Menlo Park, California campus called MPK22. The expansion included two new office buildings totaling 457,000 square feet, a sky bridge, and an eight-story parking structure. The parking structure contains 1,750 parking stalls. To make way for these new structures, five older buildings were demolished. Menlo Park’s City Council approved Facebook’s plan for the site in November of 2018, and work began shortly thereafter. In total, the project is estimated to have cost $303 million.

In the Summer of 2019, Portland bolt manufactured the anchor bolt requirements for the parking structure as well as the tie-rod assembly requirements. The anchor bolt requirement consisted of approximately 700 pieces of a 1-1/4” diameter ASTM F1554 Grade 105 anchor rods. All of the anchor rods were 3 feet long and were threaded on each end. The tie rod assemblies were all 1-1/4” diameter and ranged anywhere from 25 feet to 34 feet in length. There were 11 different assembly lengths falling in this range. Each assembly had a #3 clevis on each end, which were right hand threaded on one end and left hand threaded on the other since a turnbuckle was not used. The anchor bolts and tie rod assemblies were all hot-dip galvanized, which Portland Bolt performs in-house. In total, approximately 26,000 lbs. of material were shipped directly from Portland Bolt to the job site.