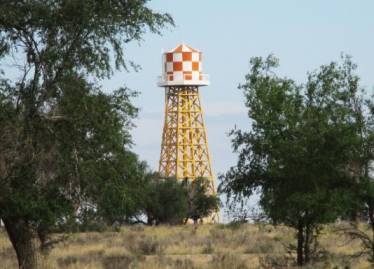 In 2012, a grant was received by Colorado Preservation, Inc. to preserve a water tank, guard tower, and barrack from the World War II Amache Japanese Internment Camp. This camp is also known as the Granada Relocation Center, located in the southeastern corner of Colorado near the towns of Granada and Lamar. After the war, Amache had been dismantled, however many of the buildings were relocated and reused, including the water tower, which had been re-erected and used for water storage for many years to come. By the time the tank was donated, it was in bad shape and in desperate need of repair.

The water tank was relocated to Fort Collins to be restored. Wattle & Daub, a historic preservation contractor, owns the Inverness farm property and won the contract to restore the tank. In order for the tank to be reconstructed, each piece was dismantled and moved to Fort Collins. Once on site, the contractor had to plane the exterior surfaces and remove approximately 3″ of rotten wood from the base of the staves. A platform was then built for the tank and flexible woven bands were used on the outside as well as temporary supports on the inside for stabilization purposes. New redwood staves of the same length, width, and depth were imported from California to complete the tank restoration. The tank roof was constructed using the same types of materials as the original. Once restored, the tank needed to be brought back to Amache, which required that it be disassembled and reassembled on site.

Due to the nature of this project, the fasteners required for the tower holding the water tank needed to have a forged square head. This is common in restoration projects where the fasteners are meant to keep the rustic look of the original structure.  Portland Bolt was contacted to manufacture these bolts since square head bolts are no longer readily available, especially in the sizes required. The 1,235 square head bolts Portland Bolt manufactured for this project ranged in diameter from 1/2″ – 1″ and ranged in length from 4″ through 17″. In addition to the square head bolts, square nuts, ogee washers and split ring wood connectors were also needed. Of course since the bolts would be exposed to the elements, all of the required fasteners were hot dip galvanized. Since Portland Bolt performs all of the manufacturing processes in house, including the hot dip galvanizing, we were able to get the parts to Fort Collins in the time frame required.