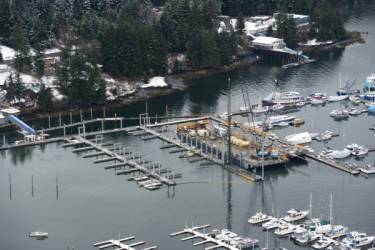 Located in Juneau, Alaska, a floating breakwater was constructed in 1985 allowing for a large increase in moorage within Auke Bay and for the construction of the original Statter Harbor moorage facilities. The harbor now primarily serves fishermen, charter operators, local boat owners, and larger sailing yachts. The harbor capacity is approximately 324 vessels and there are an additional 70 spaces for permanent moorage. The City and Bureau of Juneau entered into an agreement with the Alaska Department of Fish and Game to fund the replacement of the existing Statter Harbor boat launch. The original boat launch ramp and boarding float were built in 1986 by the State of Alaska, and the use of the existing facility was limited during low tides because the concrete ramp surface did not extend to sufficient water depth. Construction was specifically sequenced over two seasons to allow sufficient time for soft ground modifications, surcharge fill, and site paving to be completed.

Portland Bolt was involved in two separate phases of this project. The first portion was in November of 2017, which required 2-1/2” diameter heavy hex anchor bolts meeting ASTM F1554 Grade 105. These forged, headed anchor bolts were approximately three feet in length and required large 1” thick x 8” wide square anchor plates. The second phase of this project took place in the spring of 2018 and required long anchor rods meeting the same ASTM specification, which was 1-3/8” diameter and had an overall length of approximately six feet. Each rod had a custom hole drilled on each end for the use of a cotter pin along with anchor plates. Because of the federal funding, all of the bolts and hardware were 100% domestically manufactured. Also, since the bolts are exposed to the elements in a highly-corrosive environment, everything was hot-dip galvanized, which Portland Bolt performs in house.