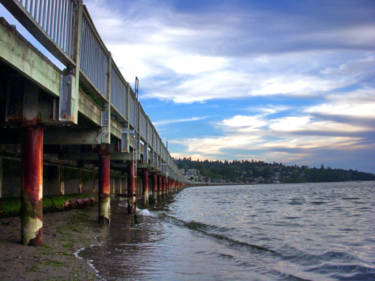 In Des Moines, Washington, located on the Puget Sound, in the Southern part of the greater Seattle metropolitan area lies Redondo Beach. This waterfront includes a boardwalk, fishing pier and a two lane public boat launch. The 838-berth small boat marina was built and opened in 1970. Ten years later in 1980, the 670 foot concrete and aluminum fishing pier was built. Redondo Beach serves as a gathering spot for families as well as experienced anglers.

In November of 2014, a storm hit the shores of Redondo Beach, leaving the boardwalk severely damaged. Many of the wooden planks making up the boardwalk snapped as well as displacement of steel and concrete. A public meeting was held and the City of Des Moines made plans to begin what was estimated to be a $4.7 million dollar project to rebuild the boardwalk. The targeted completion date was to have the boardwalk re-opened in the summer of 2016.

In the early part of 2016, Portland Bolt manufactured and supplied the required fasteners needed for the rebuild. In addition to many of other aspects of the project, the rebuild would include a concrete deck consisting of 9” thick concrete panels being bolted to the current bulkhead using over 600 pieces (totaling 15,000 lbs.) of 1-3/8” x 58” F1554 Grade 105 anchor bolts to anchor it. There were also 1” anchor rods in the same grade ranging from 58” to 64” in length. Being used with the anchor rods were square plates for each end. Not all of the required fasteners were large; however there was a requirement for the materials to be made in the USA, so Portland Bolt manufactured 900 pieces of ½” x 5” carriage bolts. Because of the marine environment, it goes without saying that the required anchor bolts and other fasteners were hot dip galvanized, which is a process done solely in-house at Portland Bolt.