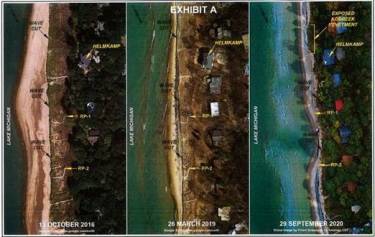 In Laporte, Indiana, the water levels on the coast of Lake Michigan are rising at an alarming rate. In the Winter of 2020, the construction of new seawalls began along the housing community of Long Beach. The new seawalls are replacing old ones that failed during recent storms. Normally this section of Lake Michigan has an ice cover that protects the shoreline, however, in the past few years, winters have been mild in comparison to previous years, resulting in waves produced by severe storms crashing into the eroded shoreline. Many of the homes were ordered to disconnect from septic tanks because of the advancing waters. Steel pilings weighing 1,500 pounds were driven into the sand acting as a seawall protecting the homes residing along the shoreline. In addition to the steel beams, concrete barriers were also installed.

In February of 2020, Portland Bolt was contacted by a steel fabricator to provide the high-strength headed fasteners required for this project. Some of the fasteners were standard size ASTM F3125 A325 heavy hex structural bolts, however, the bulk of them needed to be custom manufactured. There were approximately 750 bolts, which were 16” in length and needed 4” of thread, which is longer than the typical thread length for a ¾” A325. Due to the corrosive environment, they also needed to be hot-dip galvanized.  Due to the urgency of getting these bolts installed, Portland Bolt was a perfect fit with the entire fabrication process being done in-house as well as having our state-of-the-art hot-dip galvanizing line under the same roof. This cut down the lead time substantially, getting the fasteners on site with time to spare.