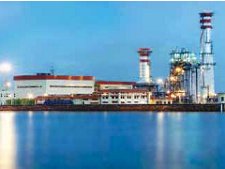 In February 2011, Portland Bolt was called upon to supply the anchor bolts required for six heat-recovery steam generators (HRSG) capable producing 2,400 megawatts of electricity for the Samalkot Power Plant Expansion in India. The project will be the largest gas turbine combined cycle power project in India’s history. With much of the financial backing coming from US banks, the project requires a percentage the material be of US domestic content and because of this, the project is expected to generate thousands of jobs here in the US. The project is scheduled for a fast track delivery and has an expected completion timeline of less than two years.

The fast track schedule and requirement for domestic material made Portland Bolt the natural choice as the anchor bolt supplier. The project required over 77,500 lbs of galvanized A449 anchor bolt assemblies in sizes ranging from 1″ thru 2-1/2″ diameter and almost 10′ length. The delivery schedule required three separate shipments. The first shipment included over 25,000 pounds of galvanized anchor bolts that were manufactured in just 8 working days and specially packaged for an international air shipment. The customer also required the bolts be assembled, packaged, and marked so that when they arrived on the jobsite they could be easily recognized and deployed to different areas of the jobsite for each of the 6 steam generators. Portland Bolt successfully completed all requirements of the project within the specified time frame.