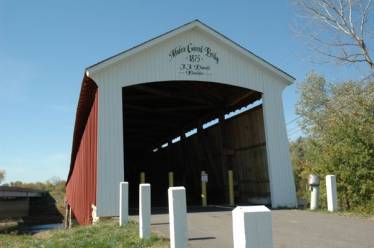 In the spring of 2010, rehab work began on the Medora Covered Bridge located just outside of Medora in Jackson County, Indiana. According to the National Register of Historic Places, the Medora Covered Bridge is the longest historic covered bridge in the United States. The length of the bridge is approximately 431 feet from abutment to abutment; however the roof of the bridge stretches to approximately 462 feet. The bridge was originally built in 1875 and spans the East Fork of the White River. When the bridge was originally built, the arches were put together in eight sections, with the six sections in the center being approximately 20 feet long by 1 foot, 4 inches high. The last two sections are even larger as they join the abutments and piers. With its Triple Span Burr Arch construction with King Posts, this bridge originally took nine months to construct.

In March of 2010, the contractor in charge of renovating the Medora Covered Bridge contacted Portland Bolt to provide the various bolts and fasteners required. Because of the renovation being paid for in part by Federal Stimulus money, the bolts and fasteners required needed to be 100% melted and manufactured in the USA. This was nothing out of the ordinary since often times Portland Bolt is involved in federally funded projects, but the requirement we found unique was the need for ¾” diameter by 9″ to 25″ long A449 square head bolts. Square head bolts are used to keep the historic, original feel to an aged structure that a hex head bolt doesn’t, but being made to a high strength specification such as ASTM A449 was quite unique. The bolts were manufactured and shipped in a timely fashion to help keep the bridge on schedule to be completed near Christmas 2010.

See a video about the restoration and the completion of this bridge.