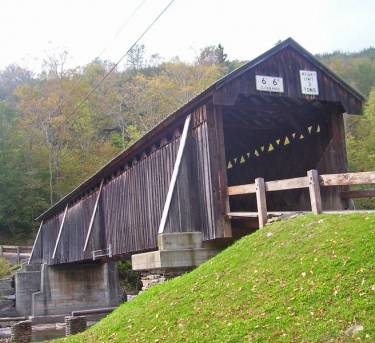 The Beaverkill Covered Bridge, which also goes by the name Conklin Bridge, is a wooden covered bridge located in the town of Rockland, New York.  The bridge was erected in 1865 and carries Conklin Road, located in the Beaverkill State Campground, crossing over the Beaverkill River.  When built, it was one of the first bridges over the river, which runs through the region of the Catskill Mountains and was largely unsettled at the time.  The Beaverkill Covered Bridge is one of the 29 historic covered bridges in New York State and in 2007 was listed on the National Register of Historic Places.  It is one of only four to be listed in this registry.

It had been proposed that in the summer of 2016, major rehabilitation was going to take place within the state campground, including the Beaverkill Bridge.  Some of the issues that needed to be remedied included the east and west abutment not matching each other and the wood rail had fallen and was missing.   The pathway under the bridge was too narrow and there was excessive paving that needed to be removed.  For the most part, much of the bridge itself needed to be replaced due to weather damage and normal wear and tear.  This of course included the hardware holding everything together.

Portland Bolt was contacted and hired on as the supplier of the miscellaneous hardware required for the bridge rehabilitation.  The hardware included a wide variety of configurations, including hex bolts, square head bolts, carriage bolts, timber bolts, lag screws and countersunk lags.  There were anchor rods and 90 degree bent anchor bolts required along with tie rods assemblies consisting of two rods, clevis ends and a turnbuckle in the middle.  These tie rod assemblies ranged anywhere from 17 feet in length to approximately 23 feet in overall length.  All of the required hardware needed to be hot dip galvanized since it would be exposed to the elements as well as needing to be 100% melted and manufactured in the USA.  With Portland Bolt’s ability to galvanize in house along with our raw material and manufacturing being 100% domestic, we were able to get the parts shipped to the jobsite on time and as needed.