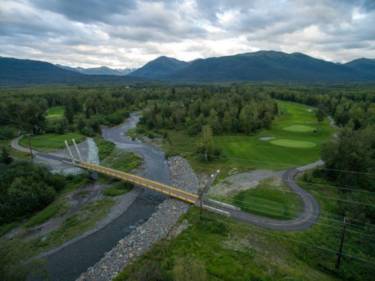 The Moose Run Bridge is located on the Moose Run Golf Course, an 18 hole course in Anchorage, Alaska. This heavily trafficked pedestrian bridge was severely damaged due to the Ship Creek flooding in the spring of 2012. The flooding of Ship Creek resulted in enough damage to where the bridge was considered wrecked beyond repair. In the summer of 2012, it had been decided that the bridge would not be rebuilt at that time, with no plans to rebuild it in the future. By the time winter had rolled around, the bridge was removed entirely. Since the bridge served as a crossing from the 3rd tee to the 3rd green, connected holes 16 and 17, and is one of only two crossings on the course, the golf course holes needed to be rearranged.

A few years had passed and eventually the decision had been made to rebuild the Moose Run Bridge. The replacement crossing would be a 200 foot long, single span bridge.  The type of bridge constructed was a patented “Strand Bridge” design, which was developed by both the engineering firm involved as well as the general contractor doing the construction. In the later part of 2015, Portland Bolt was contacted in regards to the bolts required for this project. There were 500 timber bolts needed, which are commonly used in wood applications due to the head style having a large outside diameter and a lower profile than other headed fasteners, such as hex head or square head. Timber bolt heads also have “nubs” or “fins” under the head, which grip into the wooden member keeping it from turning while tightening the nut. Due to the inevitable exposure to the elements, which can cause a high rate of corrosion, the bolts were also hot dip galvanized. For Portland Bolt, all of the manufacturing and galvanizing are done in house, which allowed for the fasteners to be completed and shipped directly from Portland, Oregon to Anchorage, Alaska with plenty of time to complete the project.