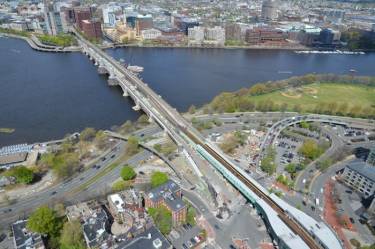 The Longfellow Bridge is a combination railway and highway bridge.  This bridge spans the Charles River and connects Boston and Cambridge.  Originally constructed in 1900 as the Cambridge Bridge, it was renamed the Longfellow Bridge in 1927 by the Massachusetts General Court to honor Henry Wadsworth Longfellow.  The bridge is approximately 1,767 feet long between abutments and 105 feet wide.  There are four iconic towers located in the center of the bridge, which because of their shape, are referred to as “salt and pepper” towers.

The construction of the new Longfellow Pedestrian Bridge required approximately 130 high strength anchor rods.  The diameter of anchor rod required was 1-1/4” and were 41” in length.  The grade of material required for the anchor rods was F1554 Grade 105 and needed to be hot dip galvanized due to its exposure to the elements.  The anchor rods also needed to be assembled with anchor sleeves and anchor plates meeting AASHTO M270 Grade 50.  Since the project was funded by the Department of Transportation, the entire anchor bolt and hardware package needed to be 100% melted and manufactured in the USA.  Portland Bolt was contacted to be a supplier of these parts due to our ability to hot dip galvanize in house.  Portland Bolt is also primarily a domestic manufacturer, so we were able to get the product, along with the material testing certification documents to the jobsite on time.