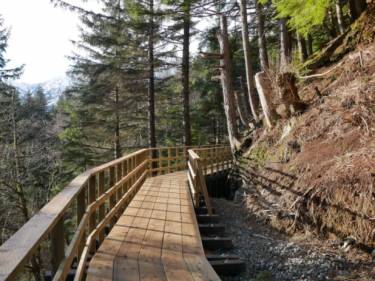 Juneau, Alaska’s oldest power plant, the Gold Creek Power Plant, embarked upon a two-year project to renovate the source of its power. The Gold Creek Flume is the 2,900 foot long raised wooden channel that funnels water from the flume intake at Gold Creek to the hydroelectric power plant that is on the outskirts of the city. The power plant was originally constructed in 1893, with the current site built in 1896. The duel Pelton wheel turbine generators that were originally installed in 1906 are still running and providing power to this day. Gold Creek Power Plant was the main source of power for Juneau until 1973 when the Snettisham Hydroelectric power plant came online. Now the Gold Creek Power Plant only supplies about 1% of the power needed for the region, but the plant still serves as a safe source of reliable energy and is used as a backup source for the Juneau power grid.

Portland Bolt manufactured and supplied over 24,000 lbs of galvanized A36 steel threaded rods, hex nuts, malleable iron washers, and lock washers in two separate shipments in January of 2019 and February of 2020. The hot-dip galvanized ¾” diameter by 80” long threaded rods are prominently featured in the flume’s construction, running vertically along the superstructure of the flume.

The flume starts at a high elevation at Gold Creek, transverses along a hillside, and finally comes shooting down to the powerplant itself, where the water crashes into the blades of the hydroelectric turbines to generate power. The top of the flume itself has a walking path that serves as a popular hiking destination and walking trail for tourists and residents. Hikers can walk the path of the flume from the intake at the creek to the power plant itself at the edge of the city.