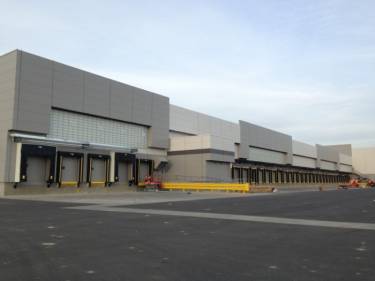 Starting on January 30th of 2015, Portland Bolt shipped the first of three orders to Tracy, CA for a new FedEx Distribution Center that would house a FedEx Ground Facility and Handling System, but also would be a co-location for FedEx Home Delivery. After the third truckload that shipped on March 6th, Portland Bolt had supplied a total of 119,000 pounds of anchor bolts with matching hardware packaged into custom crates designed for long term storage on the jobsite. The vast majority of the weight of the shipments was composed of 882 quantity of 2¾” diameter F1554 Grade 105 high-strength anchor bolts that were 44-1/4” long with a tack welded nut at the bottom.

Portland Bolt was able to facilitate acquisition of the large amount of material required to manufacture the 2¾” diameter anchor bolts and efficiently fabricate the anchor bolts per an aggressive, but realistic, schedule agreed upon with our customer. The shipments also included all thread rod to be used as epoxy anchor bolts and headed anchor bolts. The general contractor and the metal building fabrication company both appreciated Portland Bolt’s ability to manufacture and ship large volumes of anchor bolts on an rapid shipment schedule with no errors and a high degree of quality.