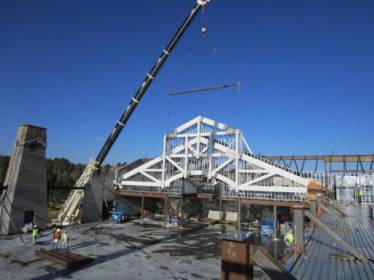 What does a company do when the availability of a common mass produced bolt is limited or exhausted? They turn to Portland Bolt to make the quality product in a timely fashion. In February and March of 2013, Portland Bolt was called upon to supply nearly 23,000 pounds of A325 heavy hex structural bolts, lag screws, all thread rod, and a variety of A307 Grade A hex bolts for a wood construction company that was fabricating large glulam beams into a large wood structure for the Charis Bible College Sanctuary in Woodland Park, Colorado. The structure used so many 1″ diameter by 14″ long A307 Grade A hex bolts that the supply of these imported bolts became exhausted from normal distributors and to meet the project’s schedule, Portland Bolt had to manufacture thousands of these bolts in combination with supplying as much off-the-shelf product as was available. In this instance, Portland Bolt acted as both distributor and manufacturer to meet the customer’s needs and demanding project work schedule.