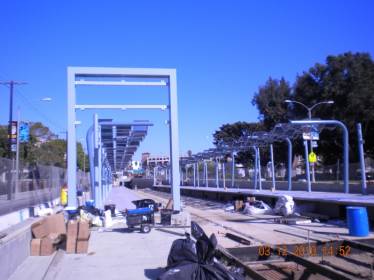 The Exposition Light Rail Transit Line (Expo Line) is approximately 8.6 miles in length and travels along the Exposition railroad right-of-way between downtown Los Angeles and Culver City. It parallels the I-10 freeway and shares a track and two stations (7th St/Metro Center and Pico) with the Metro Blue Line as it leaves downtown Los Angeles. It then travels along the Exposition right-of-way to the aerial station at Venice/Robertson. The Expo Line project is considered a “Transit Parkway” that will be enhanced by bike and pedestrian paths, as well as trees and landscaping along the alignment.