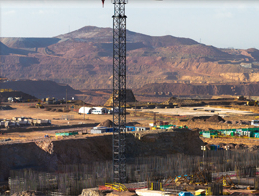 Portland Bolt was contacted in early 2013 regarding a large-scale concentrator construction project in South America, specifically Peru. One of the issues in supplying the anchor rods was that the first delivery in Peru was wanted on site by the middle of 2013. The negotiations to procure the order took over three months and finally in early May, Portland Bolt was given the go-ahead to produce all material required.

Portland Bolt made six separate shipments to the Port of Houston beginning in June, 2013 and ending in October, 2013. There was a total of 440 each, 2” x 86” rods with 1½” x 5” square plates and 806 each, 2¾” x 88” rods with 1½ ” x 6” square plates. All rods were ASTM F1554 Grade 105. At the embedded end of each rod Portland Bolt assembled a nut and tack-welded the plates to the nut along with assembling the nuts and washers at the top end. In addition to the manufacturing, Portland Bolt built and loaded a total of 88 (98” x 29” x 20”) internationally approved wood export crates. All told, the combined shipments exceeded 200,000 pounds of material.