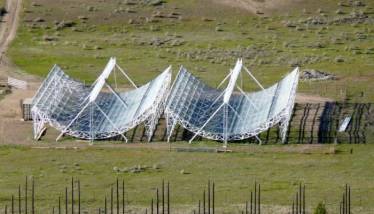 The Canadian Hydrogen Intensity Mapping Experiment, or CHIME, is a partnership between the University of British Columbia, McGill University, The University of Toronto, and the Dominion Radio Astrophysical Observatory. The CHIME project uses radio waves and a telescope to conduct dark energy experiments at the observatory in Penticton, BC.

In the winter of 2013, the project began its prototype phase known as Pathfinder. This portion of the job required nearly (300) 5/8” diameter X 12” long hot-dip galvanized F1554 Grade 36 bent anchor bolts to fasten the cylindrical reflectors to the concrete foundation.

Portland Bolt was able to provide the anchor bolts from our inventory which helped keep the project on schedule. In addition to our manufacturing capabilities, Portland Bolt warehouses a complete inventory of anchor bolts in various grades, finishes, sizes, and configurations. Let us know about your next project that requires anchor bolts or large non-standard fasteners and we will do what we can to keep your job on track.