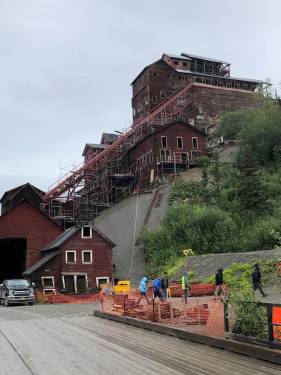 The Kennecott Mines, named after a glacier with a matching name, was originally constructed in 1911 to mine copper from the side of mountainous terrain. The mine would produce roughly 4.5 million tons of ore from approximately the years 1909 to 1938. The mine mostly produced copper, but silver was also mined. At its peak, the mine housed almost 300 people in a massive complex that contained a general store, hospital, school, tennis court, skating rink, and even a dairy. The site was placed on the National Historic Landmark registry in 1986 due to its historical significance.  Due to the mine’s proximity to glaciers and trails, it has become an increasingly popular destination for hikers and adventure seekers.

Between extreme weather and an aging structure, the site is getting rebuilt in phases. The ore chute is a central portion of the mine and was selected as needing an immediate rebuild. The contracting crew tasked with the job worked with an average crew of ten workers from May 15th to July 28, 2021, to create a huge scaffolding system allowing work to take place on the structure. Portland Bolt was selected as the manufacturing company to supply square head bolts, square head lag screws, square nuts, and malleable iron washers. All of these fasteners needed to be 100% domestic and hot-dip galvanized.  Due to the historic nature of the structure and the era that it was built, square head bolts and nuts were required to keep the aesthetic of the structure per the era it was built. Portland Bolt manufactured these fasteners from start to finish in our 94,000 square foot facility. The bolts were cut to length, forged, threaded, and hot-dip galvanized by Portland Bolt.