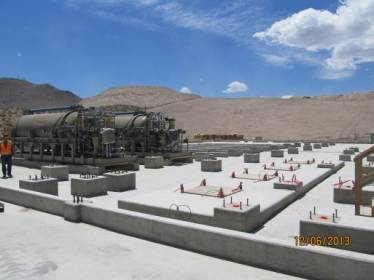 In December of 2012, Portland Bolt was called upon to supply bolts for Merrill-Crowe Foundation Project at the Hycroft Gold Mine near Winnemucca, Nevada. The project began in December 2012 and ended in July 2013. It had an estimated value of $5.2 million with over 35,000 man-hours performed before completion. The mine is stretched out over 61,389 acres and the Merrill-Crowe Plant is approximately 81,000 square feet. The Merrill-Crowe Plant is a processing plant which leaches gold and silver. The process is called Merrill-Crowe and they leach the metals by creating stock piles of ore and spray arsenic over the area to capture the residue. The ore and residue is then sent to this new building that has various filtration systems that ends in a blend of precious metals. With the additional capacity of the new Merrill-Crowe plant, it is expected to bring the total solution processing capacity to 33,000 gallons per minute. This blend is then sent to Salt Lake City, Utah, where the blend is broken down into individual metals. In 2012, Hycroft Gold Mine produced 180,000 ounces of gold and 0.9 million ounces of silver. Those numbers are expected to rise to 200,000 ounces of gold and 1.1 million ounces of silver for 2013.

Over the course of 7 months, Portland Bolt manufactured and shipped over 21,000 pounds of anchor rods for the Merrill-Crowe Foundation expansion at the Hycroft Gold Mine. Most of the anchor rods had thread on each end with a nut tack welded in three places on the bottom.  Because the project had critical time restrictions, many of the bolt releases were rushed through our facility and shipped within 3-4 working days. Do you have a project that requires a strict lead time? Give Portland Bolt a call. With experienced estimators and our 94,000 square foot manufacturing facility, we can easily meet your construction schedule needs!