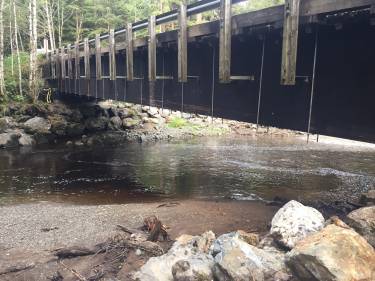 Built in the year 1987, the Shaheen Creek Bridge spans 100 feet and is a glue-laminated timber bridge that transverses the Shaheen Creek on Prince of Wales Island in Alaska. Flooding and debris have twice damaged the bridge in the last few decades to such a degree that significant repair projects had to be undertaken. During the year 2000, the bridge’s girder was significantly damaged due to log debris striking the bridge. The bridge girder was later repaired. Again in the fall of 2020, flooding caused debris to accumulate under the bridge and damage occurred from the pressure of the mounting debris.

After considering many repair options, the US Forest Service decided to repair the bridge deck with long headed bolts that would tie the bridge deck to the bridge girders to straighten and strengthen the bridge. Portland Bolt provided highly custom A307 Grade A hex head bolts that were 96” long and would be used in combination with large rectangular A36 steel plates placed under the bridge girders to provide support. Portland Bolt manufactured and hot-dip galvanized not only the bolts, but also manufactured and galvanized the large rectangular plates from start to finish using our own manufacturing capabilities.