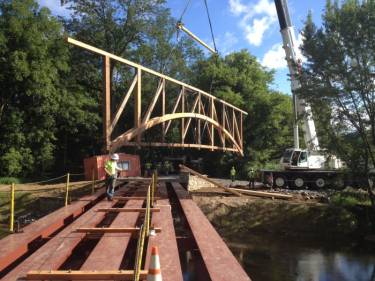 The Speakman Bridge #1 spans Buck Run Creek and measures 93 feet in length.  It is a Burr arch-truss design and was built by Ferdinand & Menander Wood.  In 1959, the bridge was almost destroyed after it was set on fire.  Thankfully, the Modena Fire department and the Doe Run Valley Farms Patrol were quickly called to action and were able to save the bridge from serious damage.  Chester County, where both Speakman Bridge #1 and #2 reside used to be home to 85 covered bridges, but only 15 of those still remain today.

The bridge was closed for almost 5 years because construction could not begin until a legal battle of property ownership was resolved.  PennDOT purchased the land the bridge sits on and began work on the project.  Because this project received federal and state funding, the materials not only had to be 100% melted and manufactured in the United States, but they also had to be made by a manufacturer who is PennDOT Bulletin 15 approved.  All of these requirements made Portland Bolt the clear choice to manufacture the specialized bolts for this bridge repair.  Portland Bolt specializes in manufacturing domestic construction fasteners like the hex bolts, hex lag screws and fully threaded rods that were required in this project. There were also special, domestic ogee washers required on the job which was no problem for Portland Bolt. The hardware accessories were all included with the bolts since Portland Bolt likes to make it easy for our customers to get all of their required parts from our one location.

Do you have a project that requires 100% domestic materials?  Give Portland Bolt a call. Our estimators are standing by, ready to help with your next project.