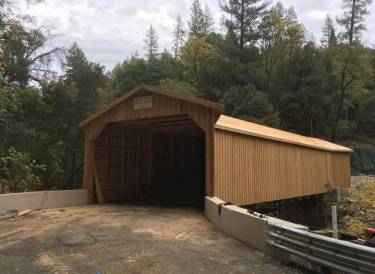 Considered to be one of the oldest covered bridge in California, the original 101 foot Oregon Creek Bridge was original built in 1860. When a nearby dam broke in 1883, the bridge washed downstream and was eventually recovered. However, the bridge was reinstalled backwards.

In 2016, a rehabilitation project began to replace the old bridge. Portland Bolt provided fasteners in various configurations, including hex bolts, heavy hex bolts, lag screws, and structural bolts. All items were hot-dip galvanized in our 94,000 square foot facility. Portland Bolt was able to provide all items as USA melted and manufactured with full certification documents.

If you have a project that requires galvanized domestic fasteners, give Portland Bolt a call and one of our experienced estimators will be able to assist.