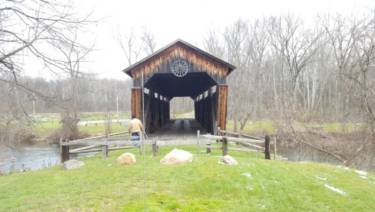 In the year of 1867 in Pymatuning Township, Mercer County, Pennsylvania a flood destroyed the Kidd’s Mill wooden bridge named after Robert D. Kidd and the mill he constructed nearby. A new covered bridge was commissioned  to be built to replace the flooded and destroyed uncovered bridge. The purpose of covering a bridge is to have a protecting structure over the top of the bridge to shield the structure from sunlight and weather which greatly increases the lifespan of the bridge. An uncovered bridge using the wood and materials available in the 1800s would only last roughly 10 – 15 years.

The new covered bridge was designed by Robert Smith and built by his wooden bridge company the Smith Bridge Company of Tipp City, Ohio. Smith’s patented Smith Truss system was utilized for the structure and the bridge was constructed in Ohio and shipped to site via rail. The new covered bridge was built in 1868 over the Shenango River with a single lane. It is the last standing covered bridge in Mercer County and is the last standing bridge built by the Smith Bridge Company east of Ohio. In March of 2017, Portland Bolt supplied 100% domestic and hot-dip galvanized wood fasteners including square head lag screws, long threaded rods, malleable iron washers, shear plate connectors, and custom high-strength square nuts for a rehabilitation project to repair, strengthen the bridge, and straiten/level the bridge correctly.  The Pennsylvania Department of Transportation managed and partially funded the project, which required all materials to be manufactured in America by Bulletin 15 approved supplier. The bridge itself is owned by Mercer County, but the park surrounding the bridge is maintain and operated by the Shenango Conservancy.