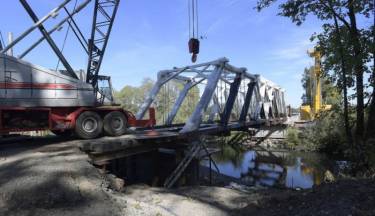 In July of 2017, Portland Bolt shipped nearly 6,000 pounds of 100% domestic wood fasteners for refurbishment of the Gilkey Covered Bridge project near Scio, Oregon.  The Gilkey Covered Bridge was originally built in 1936 in Linn County to traverse Thomas Creek and connect Goar Road over the tributary.  The Gilkey region was a nexus for farm products and the bridge carried road traffic over Thomas Creek allowing shipments to travel to and from the region.

The bridge utilizes two large Howe trusses spanning 120 feet over the creek and was added to the National Registry of Historic Places in 1987.  Linn County operates and maintains hundreds of bridges and this project is in a series of covered bridge construction projects over the past handful of years to repair and update the covered bridges of the region using Oregon Department of Transportation specifications and inspection.

The construction took place from June to October in 2017 and would make extensive restorations to the timber and hardware on the bridge.  The project would also rebuild the bridge approaches and the substructure of the bridge.   Portland Bolt manufactured thousands of domestic fasteners for the project including carriage bolts, hex bolts, threaded rods, square head lag screws, hex lag screws, and galvanized square plates.  These bolts were paired with domestic heavy hex nuts, washers, and our own domestically manufactured malleable iron washers.  All items were supplied in a hot-dip galvanized finish and the bolts were galvanized in our hot-dip galvanizing facility.