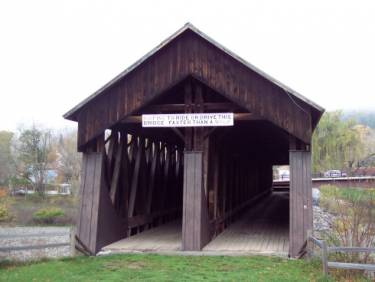 The old Blenheim Covered Bridge was once the longest spanning, surviving covered bridge in the world. It spanned 210 feet across the Schoharie Creek in North Blenheim, NY. The bridge was opened to traffic in 1855 which made it one of the oldest covered bridges in the United States. It remained in use for vehicles until 1932 and was maintained as a historic site open to pedestrians until 2011. It was declared a National Historic Landmark in 1964.

In 2011 during Tropical Storm Irene, the Schoharie Creek flooded to record levels and swept the existing structure away and damaged it beyond repair. In September of 2017, the Federal Emergency Management Agency (FEMA) approved a $5.8 million plan to completely rebuild the Blenheim Covered Bridge. The new bridge will be a direct replica of the old one, but it will be built 15 feet higher to protect against future flooding. The new replica bridge is set to open in early 2018.

Portland Bolt provided the tie rods and wood fasteners for the new bridge replica. Because the materials will be exposed to the elements, all fasteners had to be hot-dip galvanized or stainless steel to prevent corrosion. Timber bolts with large ogee washers were used for the timber frame, and tie-rod assemblies were used with turnbuckles to span the distance of the new structure. The tie-rod assemblies included large square nuts to maintain the historical significance and style of the original bridge.

Portland Bolt has provided fasteners for numerous, historical covered bridges. Our 94,000 square foot manufacturing facility and in-house hot-dip galvanizing line allows for quick turn-around times on even the largest of projects. If you have a project that requires custom fasteners give Portland Bolt a call. Our estimators are standing by to assist you on your fastener needs.