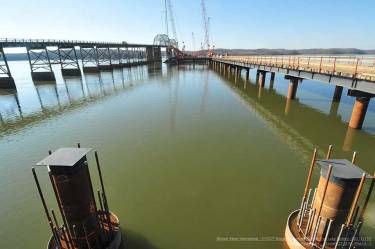 Land Between the Lakes National Recreational Area in Kentucky has only one road traveling east and west. The two bridges that lead to the NRA, the Eggner’s Ferry Bridge to the west and Lawrence Memorial Bridge to the east, were built in the 1930s. In 2013, the decision was made to modernize and widen the bridges.

In January of 2015, Portland Bolt manufactured bolts for the Lake Barkley Bridge that replaces the original Lawrence Memorial Bridge. Due to a conflict between the plans and reality, bent bolts were required instead of the originally designed straight rods. Portland bolt was able to manufacture 1½” diameter hot-dip galvanized F1554 Grade 105 bent bolts with threads on each end. Included with the domestically manufactured bolts were domestic F436 washers and A563 Grade DH heavy hex nuts.

If your project requires nonstandard or hard to find bolts and rods, give one of our experienced estimators a call and we’ll manufacture exactly what you are looking for.