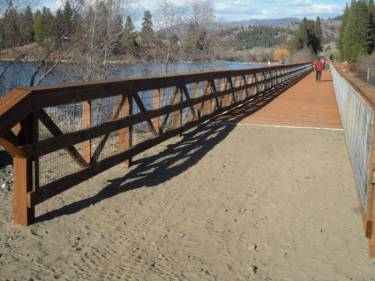 In October of 2013, Portland Bolt manufactured custom sized large hex bolts and hex lag bolts for the refurbishment of an old railroad trestle into a pedestrian, hiking, biking, and equestrian bridge that would transverse Curlew Lake which is north of Republic, Washington. The bridge would carry adventurers across the lake along the picturesque trail following an old railroad line connecting the towns of Republic, Malo, Curlew, and Danville and up to the Canadian border. In addition to the large custom fasteners required for the project, Portland Bolt also supplied large custom plates with multiple holes and in a variety of shapes to be used with multiple fasteners. The plates were galvanized by Portland Bolt in our own hot-dip galvanizing line. Portland Bolt also supplied a large amount of standard galvanized lag bolts and hex bolts for the project.