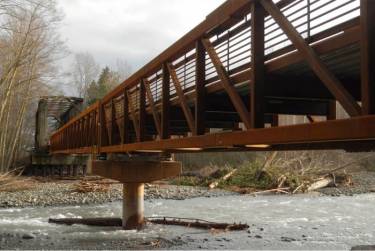 The Dungeness River Bridge is located in Railroad Bridge Park in Sequim, WA. The bridge dates back to 1916 and was built as a railroad trestle bridge for the subsidiary of Chicago, Milwaukee, St. Paul and Pacific Railroad. Due to the vast amount of timber, the bridge was constructed entirely from wood. It was replaced in 1930 and the new bridge was also made entirely of wood. When Milwaukee Railroad went bankrupt in 1980, the bridge was left abandoned until 1992, when volunteers began to restore the bridge. It was converted as part of the 130 mile Olympic Discovery Trail in 1995. Because it is one of the last remaining timber Howe through truss railroad bridges in Washington, the Dungeness River Bridge is listed in the National Register of Historic Places.

In February, 2015, the bridge was damaged due to flooding and high winds. Many fallen trees were carried downstream in the flood water and overloaded the timber pilings which were the main support for the timber trestle. The bridge was closed from February to December while construction crews worked on building a new, 182-foot-long trestle section of the bridge. The old trestle was completely removed and a new concrete pier supports the new trestle allowing for better debris flow in the river.