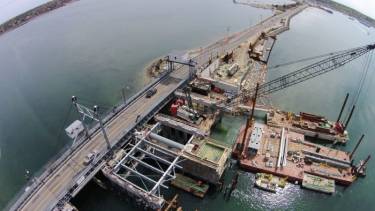 The Massachusetts Department of Transportation funded a new bridge to span between the towns of Tisbury and Oaks Bluffs called the Lagoon Pond Bridge Replacement Project. Connecting the two island towns located on the island of Martha’s Vineyard with a new drawbridge was a time consuming process to plan and build, and the project has a total construction value of $43 million for the new drawbridge. In April of 2015, Portland Bolt was selected to supply the large domestic stainless steel bolts due to our efficient ability to produce large domestic fasteners per our customer’s project schedule and per the specifications and requirements of the project.

The bulk of the materials supplied were custom and long domestically manufactured stainless steel headed bolts. The large stainless steel fasteners were to be used primarily in the fendering system of the new drawbridge which protects the bridge from impact and debris. These A193 Grade B8M heavy hex bolts, manufactured from type 316 stainless steel, were unique due to their long lengths (from 14” to 40” long), larger diameter, and the fact they needed to be domestically manufactured by a company in the United States to the specific requirements of the project. Portland Bolt was also was able to manufacture and supply a large amount of other fasteners such as all thread rod, hex lag screws, hex bolts, lock nuts, round bend u-bolts, and washers that all needed to be custom made due to the domestic requirement of the project. Portland Bolt also supplied hot-dip galvanized A449 heavy hex bolts and F1554 Grade 55 all thread rod anchor bolts to the project on expedited lead times to keep the project on schedule.